It has been seen that Microsoft follows a pattern of first releasing new features for Exchange Online before the features are introduced in Exchange on-premises in a later release or frequent upgrade for the on premises users. This year again, the much anticipated features for on-premise users are about to be previewed towards the mid of 2018 and will be finally released in the latest Microsoft Exchange 2019 towards the end of 2018. This release is expected to depict improvements in four different areas: Security, Manageability, Usability and Compliance. 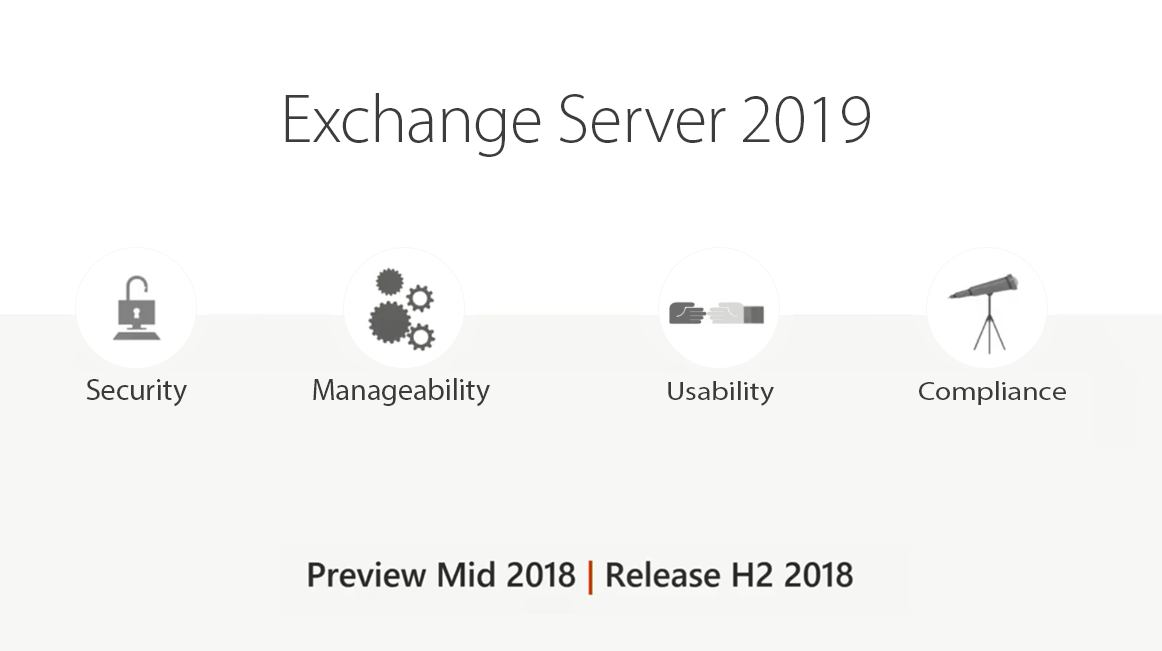 Let’s have a look at what the upcoming features of Exchange 2019 are. All the features listed below revolve around the aforementioned four basic domains of improvement in MS Exchange.

The improved MAPIhttp protocol will prevail in the next release of Exchange 2019. It is also supported by all Outlook Clients. It means that the deprecated feature from last release, RPC-over-HTTP shall be removed in the upcoming release as it is needless now.

As provided in the previous versions of Exchange Server, Migrations are expected to be seamless in this release as well. A capability to migrate from Exchange Sever 2013 or 2016 side-by-side is expected to see in future.

Challenges like delegates, sharing of calendar and events between Exchange Online and Exchange on-premises need to be catered and Exchange 2019 is expected to show some improvements in this domain.

What is NOT EXPECTED?

It is analyzed that the feature of Office 365 Groups is not, in the long run, going to be a beneficial feature for Exchange Server clients. So the introduction of Groups for a cross-collaborative on-premises experience is not expected in this release. Groups are a thing of the cloud and only then they can be beneficial, the feature can stay with Exchange Online but not on-premises.

MachPanel is a multi-functional Control Panel for hosters. It is a multi-cloud Service Orchestration and delivery platform. It offers Microsoft Validated Exchange Control Panel Supporting Exchange 2016, 2013, 2010, with which you are offered complete automated stand alone or multi-datacenter deployment in a seamless manner. MachPanel comes with industry specific after sales support along with a user friendly and usable interface. The flexibility and ability to manage mailboxes, contacts, public folders, distribution lists, billing, selling, private labeling, API integration etc. in a user friendly manner makes it the number one choice for Teleco’s and Hosters. The features of MachPanel Automation Module for Microsoft Exchange always keep you ahead of everyone else in the market.

Cross forest migration refers to Exchange mailboxes migration amongst Active Directories. Companies often opt for such a migration when a cross Domain functionality is required i.e. Microsoft Exchange deployment is needed on a new Domain. This is a tedious process, where there is a lot of command line handling and PowerShell scripts that may result in data loss, if not handled properly. Thus, the...

Microsoft Exchange is adopted by most enterprises these days as the mainstream tool for business email and collaboration. Since it is one of the most popular email management business productivity tools of this age, businesses are creating more data than ever that is accessible anywhere anytime. Cloud Data is Your Responsibility Whether you are making the shift to the Cloud or setting up the on...